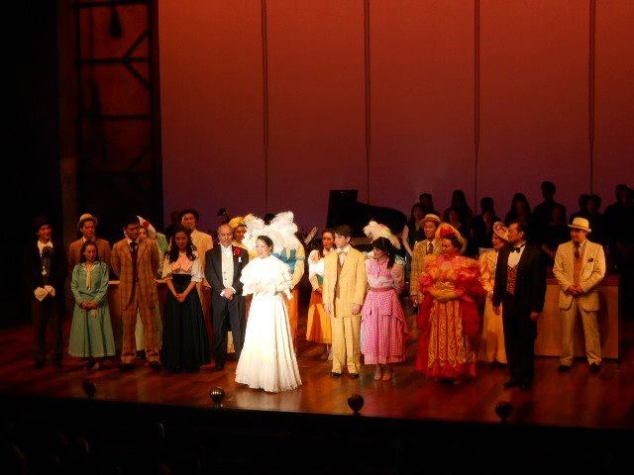 Christine Toy Johnson, in white, as “Dolly” with the cast at the Curtain Call.  What a fabulous ensemble cast!

Hello, Dolly! is a show that can be not only enjoyed, but also understood, by just about any cultural or regional group.  It’s the story of a savvy matchmaker who sets her sights on one of her own clients.  She wants him for herself.  Trouble is, she’s already set him up with somebody else…

Everybody who sees it can relate.

Tonight the National Asian Artists project put on an Asian production of Hello, Dolly!, and  what a
performance!   I saw Carol Channing in the 1993 revivial, Barbra Streisand in the movie, Tovah Feldshuh at the Paper Mill Playhouse, all different, yet each in her own way superb, yet I’ve never before seen the show done with as much joy and gusto as it was performed this evening.  Those actors onstage were having a ball!

The show was directed by Lee Roy Reams, and starred Christine Toy Johnson as Dolly, with Carla Ogden, Austin Ku, Raul Aranas, Rebecca Lee Lerman, Karl Josef Co, Sam Tanabe, Alex Chester, and Jaygee Macapugay.  Every single one of them was entertaining us and loving their roles.  What enthusiasm!  The show also featured David Shih as Rudolph Reisenweber, the German owner of the Harmonia Gardens Restaurant, which is the setting of the song “Hello, Dolly!”  David Shih absolutely gloried in playing the part with a hilariously thick German accent.  He got the biggest laughs of the night – and earned them.

There is one other performance of the show – May 6th, 7:30 p.m., The Irene Diamond Stage at The Pershing Square Signature Center.  This is one that I’m hoping will move to a theater and have a run for awhile.

I found out about the production because two friends were involved.  Mark York, founder of The Ziegfeld Society, did the lighting – and put it all together this afternoon in only a few hours, with the show going up tonight!  I’d say that’s a record.  Richard Skipper, who is a Hello, Dolly! historian with a book in the works about the history of the beloved show, was a Producer Associate.   Tonight he was also there as a proud godfather, because his little goddaughter, the one, the only Emily Gu Siegel, was one of the children in the production.  Was a new star born tonight?  Time will tell! 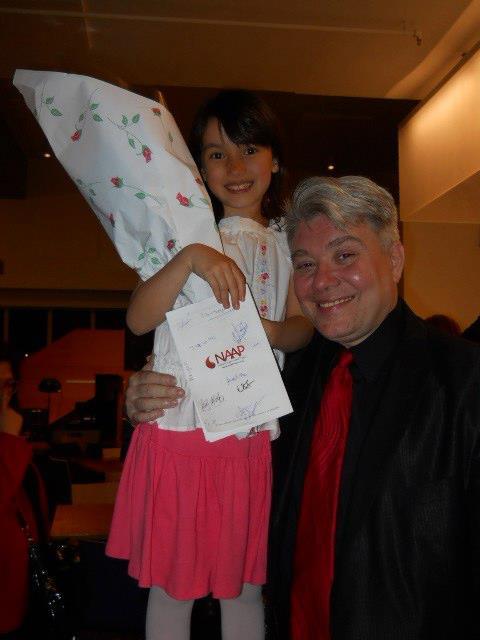 Richard Skipper and his god-daughter